Cummings in Audience at State of the Union Address 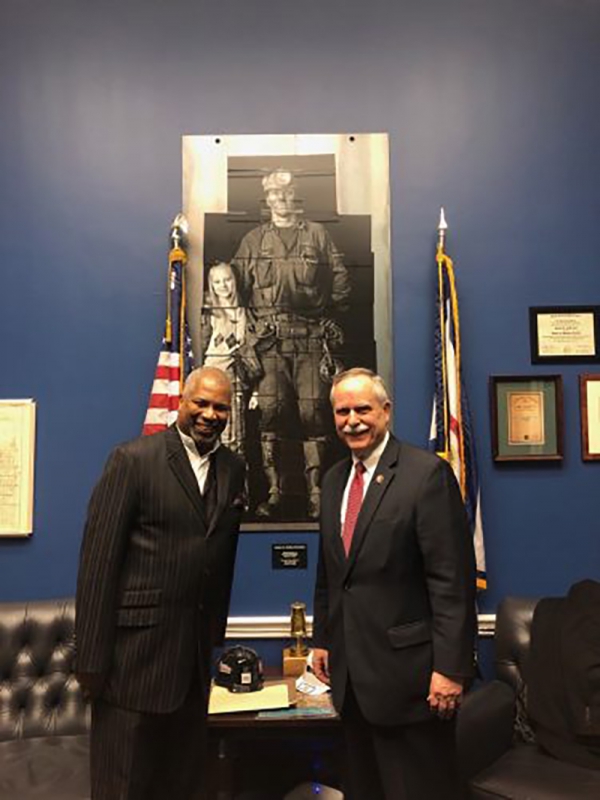 WHEELING — The Rev. Darrell Cummings was in Washington for the State of the Union Address on Tuesday night, and he said he witnessed Vice President Mike Pence and House Speaker Nancy Pelosi speaking “like friends” moments leading up to the event.

Cummings was invited to be in the gallery for the State of the Union as the guest of Rep. David B. McKinley, R-West Virginia. He said his seats were “extraordinary” — three sections away from first lady Melania Trump, Trump family members and special guests recognized by the president during the speech.

He said he had a chance to observe much happening in the room as those present were seated for about an hour before the president arrived.

“There appeared to be a good relationship between Vice President Pence and Speaker Pelosi,” he said. “They talked much before the session. They smiled when they saw each other.

“If I didn’t know better — and I don’t — I would have thought they were friends.”

Cummings said he witnessed Trump rebuff Pelosi’s attempt at a pre-speech handshake, but didn’t learn until later of Pelosi ripping up of Trump’s speech at the end of the event.

He also took note of the Democratic female House members dressed in white sitting together on the House floor. At one point, someone yelled out from the gallery.

Cummings said he wasn’t certain what was said, but security took action to remove the individual. The House women in white, meanwhile, stood to cheer him at the same time Republicans stood to cheer a remark from the president.

“I thought the Democrats did make some noise, but they were not totally disrespectful,” Cummings said. “They expressed their opinion, and so did Republicans. But they were respectful….”

Cummings said he was impressed by the “number of inspirational human stories” told during the speech, and honoring special guests in the gallery.

He said he was especially taken with the story of the 100-year-old former Tuskegee airman, and his young grandson who wants someday to fly in space.

“Not everybody agrees with everybody about everything, but it was inspirational and I was glad to be there,” he said.

Cummings admitted to not being a fan of the politics of commentator Rush Limbaugh, who was presented the Presidential Medal of Freedom Award during the event. Limbaugh has been diagnosed with advanced lung cancer.

“I was sad about his sickness,” Cummings said. “I don’t agree with him, but I said a prayer for his health. You want to do everything you can to encourage someone going through something like this.”

Cummings wasn’t able to take photos inside the gallery, as all visitors were required to give their cell phones and all other recording equipment to security prior to entering the House chamber. They also could not leave until after President Trump left the gallery.

Cummings’ wife Latisha accompanied him to Washington, but she could not attend the State of the Union address with him. Invitees received just one ticket.

But the couple was able to enjoy a tour of both the White House and U.S. Capitol building Wednesday morning courtesy of McKinley and his staff. Prior to leaving for home they also visited the Lincoln, Jefferson and World War II memorials along the mall, and concluded the trip with a stop at the Martin Luther King Memorial.

McKinley said it is one of the perks of his office to invite someone to attend the State of the Union Address, and Cummings was an obvious choice.

“A couple of weeks ago, I had the chance to sit down with the people of his congregation, and they were powerful,” McKinley said. “In 10 years of doing this, it was one of the best roundtable discussions we’ve had.

Source: The Intelligencer. Wheeling News-Register, Joselyn King, 02/06/2020
Photo: U.S. Rep. David B. McKinley, R-West Virginia, right, gives The Rev. Darrell Cummings of Wheeling a tour of his office prior to Tuesday night’s State of the Union address in Washington.